Alejandro González Iñárritu has provided this year’s Oscar season with perhaps the most artistic picture of the bunch. The director of the critically acclaimed Amores Perros (2000) and Biutiful (2010), as well as 21 Grams (2003) and Babel (2006), well and truly imprinted his own stamp on the contemporary cinema landscape with a beautifully constructed imagining of the rebirth of a former Hollywood star turned theatre actor in a movie of three shots purposefully constructed to match the three act structure of theatre and film theorised by Stanislavski.

The work of Iñárritu and his cinematographer not only completely encapsulated the subject matter, but also helped to raise tension in a way that put you on the edge of your seat. Typically, quick edits and claustrophobic shots would be used to produce the effect of tension, yet the individualistic style incorporated by Iñárritu made for a better tool than most who have tried to tackle similar issues. Flowing shots broken up by character introduction and departure, as well as the sensational use of music that helped to feed the drama more effectively, encapsulated the ever-growing tensions of Michael Keaton’s character Riggan and produced an effect whereby the audience was led to question Riggan’s reality and thus become engrossed on a crumb trail of plot and character discovery. In creating this effect, Iñárritu had produced the perfect frame for what was probably the best Michael Keaton performance ever. 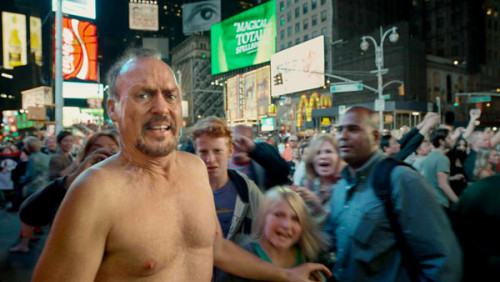 Keaton was perhaps the perfect casting choice for this picture. In Birdman, he plays a former Hollywood A-Lister who played a superhero called “Birdman” 20 years earlier and had fell off the radar. He then tried to resurrect his career through adapting, producing and starring in a play. Sound familiar? It should. Keaton’s role as Batman in the late 80’s and early 90’s were career defining and you wouldn’t be hard pressed to come up with an argument for how Keaton’s career had been all but over in recent years. Birdman, and the character of Riggan, were – in effect – as close to a biographical tale of the star as there could be (with some notable exceptions I shan’t go into for fear of spoiling the film). It is for this reason that he played the role so magnificently, yet it is for the same reason that I think he should not be awarded the Academy Award at this year’s ceremony.

Michael Keaton was a central figure to all that was going on around him in Birdman, and he carried the role with the sort of puffed out chest you’d expect of an actor on his return to form, and a tonne of credit has to go to him for that. But, in a role where he was effectively playing himself and was often outshone (by Edward Norton and Emma Stone in particular), I can’t help but to feel that there was that special something missing. In my opinion, Eddie Redmayne was better, even if it was a typically Oscar winning role and performance. Comparisons and Academy Award chatter aside, Keaton was strong… Real strong. And, if the film had been made with anyone else in Keaton’s role, then it probably wouldn’t have worked. However, his performance merely filled the boots of the character he had to play – in my opinion – and while positive reviews have to go to him for that, I can’t help but to believe that credit for this film must lay at the director/writer’s feet and that of his cinematographer, not at the feet of the film’s star.

What the style of the film did so well was provide platforms for true performances, specifically from the supporting cast. Edward Norton excelled in the role of pretentious New York theatre star as a result of this. The way his character was introduced, removed, and reintroduced, allowed for audiences to prepare themselves for the extra elements of the character implemented by Norton via the script. Similarly, Emma Stone was able to excel as a result of this layered development and despite appearing for only a small time, managed to provide one of the best pieces of acting in her short career. It is perhaps unfortunate that Stone’s role in the film was so small that it probably cost her the opportunity at an Oscar nod this year.

Overall, Birdman is a fantastic piece of cinema with a great sense of dark humour and a fantastically developed script. Iñárritu’s work on this project has pushed Birdman into the realm of “21st century great” and really helped to re-work the ways we see contemporary comedrama. If anything’s for sure, it’s that Birdman will be well represented at the Academy Awards and deservedly so.