A few days ago I published my review of JJ Abrams’ Star Wars: The Force Awakens (2015) in which I raved about how good the movie was. Today I look to go under the surface of those cinematic things like plot and mise-en-scene to offer you five straight up facts that are sure to enhance your enjoyment of the world’s most beloved movie, or at least help you to win those ‘my opinion is right’ conversations we all have with our acquaintances from time to time.

5. The Force Awakens marks the first Abrams film to not feature musical work by Michael Giacchino. Instead, Giacchino was credited with being a stormtrooper and is said to have preferred Williams returning to the saga anyway.

4. Oscar Isaac’s uncle was invited to the set of the film after Isaac told Abrams about how much of a fan of the franchise he was. When on set, Abrams surprised the family member with a spot on the film as an extra.

3. Simon Pegg’s unrecognisable appearance as Unkar Plutt makes him only the second actor to ever appear in both Star Wars and Star Trek live-action movies. The first was Deep Roy who was uncredited as Droopy McCoy in Return of the Jedi and Keenser in Star Trek (2009) and Star Trek: Into Darkness (2013). 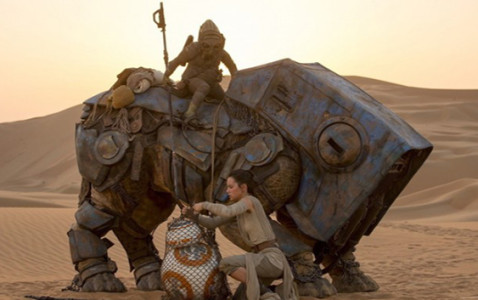 2. Elizabeth Olsen was considered to play the role of Rey but declined due to scheduling conflicts with Marvel’s ‘Avengers: Age of Ultron’ in which she played Scarlet Witch.

1. Greg Grunberg’s small role as an X-Wing pilot in Star Wars: The Force Awakens continues Abrams’ trend of casting his childhood friend in each and every one of his movies. The former Heroes actor’s first appearance in an Abrams film was when each of them were aged 10 and would film home movies together.